My Pet Ate What? 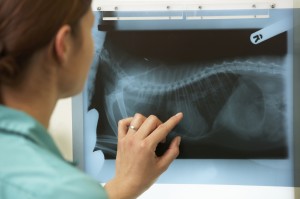 Pets are known for ingesting all sorts of crazy things. Many times these objects pass through the gastrointestinal system without causing a problem. Other times, however, they can wreak havoc on the body.

Why Pet Foreign Bodies Are a Problem

A foreign body is simply an object that is not supposed to be in your pet. Anything that your pet ingests and fails to pass through can be potentially harmful. The seriousness of a foreign object being lodged in the gastrointestinal tract depends on:

Foreign objects, especially those stuck for a longer period of time, can eventually cause a hole to form in the intestines. This is especially bad because it allows leakage of the intestinal contents (including bacteria) into the abdomen.

Other objects, such as coins, can be dangerous because of the toxic effects they have on the animal.

Virtually anything can become a foreign object. It is important to know your pet and know what items may be tempting to him or her. Cats, for instance, are often attracted to string, nerf darts, and rubber bands, while dogs may prefer to seek out objects that have been in contact with food.

As the kids head back to school, don’t forget to think about what might be hiding in their backpacks. Here are a few possible “My pet ate what?!?” scenarios:

Besides getting stuck in the gastrointestinal tract, foreign object ingestion can lead to other problems as well. Be sure to put your kid’s bags and backpacks, and those of visitors to your home, in a secure location to avoid accidents.

If you think that your pet may have ingested a foreign object, please let us know right away. Depending on the object, we may induce vomiting in your pet in order to try to retrieve the item. If an object becomes stuck in the intestines, pets often become very sick. Many exhibit vomiting and/or diarrhea as well as abdominal pain.

If a foreign body obstruction is suspected, surgery is often required to relieve the problem. Many times pet owners do not realize that their pet has ingested an object until it is surgically removed.

Be sure to keep tempting objects out of your pet’s reach to prevent a potential foreign body obstruction. Keep a close eye on your pet and be aware of his or her habits. Most importantly, alert us immediately if your pet may have ingested a foreign object. The sooner medical attention is received, the better.

tags:
posted in:  Pet Safety  |  Pet Toxins
Previous: Practical Ways to Avoid Pet Poisoning This Fall
Next: Getting the Most out of Your Pet Wellness Exam